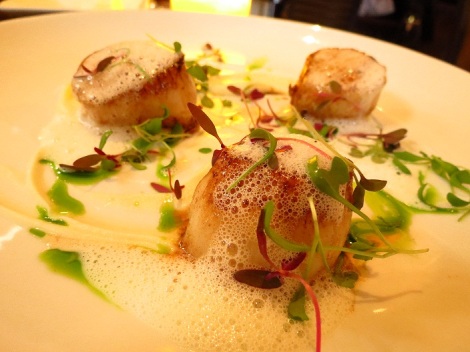 Scallops, truffles, shrimp, oh my! When in the mood for a random date night, the boyfriend and I enjoy an occasional visit to Fraiche Restaurant in Santa Monica. This casual fine dining outlet located one block away from the Third Street Promenade offers a lovely atmosphere, attentive service, and reasonably-priced food with a gourmet flair. We’ve been fans of Fraiche ever since I fell in love with their comforting Monkfish dish a couple of years ago, and I have to say that everything else I have tried on their menu has been consistently good.

We began with the Salmon Tartare ($14) and the Scallops ($14). Boyfriend’s tartare was fresh and accented with basil aioli, ripe chunks of avocado, and chives. My scallop dish (pictured above), was a real treat; perfectly seared scallops, slightly medium-rare in the middle served with a brown butter foam, microgreens, and cilantro oil on a celery root puree.

For entrees, I went for their Shrimp Tagliatelle featuring al dente pasta made fresh in house with plump shrimp in a lemon basil cream sauce. The lemon was a touch overwhelming at first, but the richness of the sauce helped balance the flavors out. While this wasn’t my favorite dish here, it was a reasonable serving size for it’s price tag ($18). Boyfriend ordered their Truffle Burger which is probably their best deal as far as price-points go. For only $10, a thick and juicy burger topped with fresh truffle aioli, cheese studded with truffles, and an onion fondue is served alongside fresh cut fries and an arugula salad.

Their dessert offerings were tempting, but after a few glasses of prosecco and Belgian beer we decided to call it a night and take a moonlit stroll along the shore instead. Fraiche Santa Monica is definitely a solid choice for a casual night out.